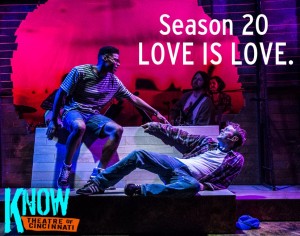 For 20 years, Know Theatre has been creating a theatrical playground in Cincinnati, uniting audiences and artists in a love of theatre, art, and and community.

So for this season, we celebrate love in all its varied forms: romantic love, love for humanity, love for the world, love for life, and the love that binds us all together in troubled times.

Set deep in a Florida swamp, The Arsonists is a father-daughter tale of grief, loss and redemption. Inspired by the Greek tragedy Electra, this play with music is a contemporary American myth that explores the relationship between parent and child in that small space between death and life, the last breath before the awakening.

On the porch of an almost-charming cabin in the Catskills, two New Yorkers reckon with the moment when Plan A fades away but Plan B has not emerged. In other words, they’re turning forty.

Janelle’s a teacher in crisis. Martin’s a computer programmer who’s aged out of being a wunderkind.

This funny and earnest play explores the meaning of family, and the things we do for the people and things we love.

The world premiere of a magical, heart-filled comedy which was featured on the 2015 KILROYS LIST of most recommended new plays by women and transgender authors.

Know Theatre brings this incisive new play to the stage in one of the first productions to follow its world premiere at Dr. Barbara Ann Teer’s National Black Theatre this spring.

1MPF invites local writers and community members into their unique playmaking process. Writers are asked to consider the world around them, their cities, their communities and the ways in which they view the world, before writing topical moments that say something about the world as it is in the here and now. Local directors, actors, and community members are tapped to stage and shape these moments (70-90 on average) with a unique local flavor.

Fan Favorites from the Lightning Cube return, without the agonizing wait between episodes. Two shows hit the stage once more as continuous stories you can enjoy in one sitting, just like you Netflixed ‘em. Binge Watch shows to be announced soon!

Serials continues in Winter of 2017 with a reprise of our Theatrical Deathmatch’s second iteration. Winners of the final vote get the chance to return in a Serials! Binge Watch in Season 21!

1929, a dead body is found and placed on display in hopes of identification. That’s when the “Dead Dreams” began.  Experience the shared recurring nightmares that haunted the sleepy town of Sabina OH, and the stranger-than-fiction story of “Eugene.”

The Death of Brian: A Zombie Odyssey
Dates TBA.

AND MORE TO COME.

A DECADE AND A HALF OF FRINGE.  And it’ll just keep getting bigger, better, and weirder.

Know to Go!
Education Programming WE bring to YOU.

The Inventive Princess of Floralee
(created for grades K-5)

This original, two-person, interactive, 45-minute fairy tale will have your students “thinking like scientists” as they follow the Princess of Floralee on the adventure of a lifetime, searching for the kidnapped king kept in the clutches of a viciously vile and wrathfully wicked witch. Along the way, young audience members will help the princess solve a variety of math, engineering, science, and even dance challenges as she uses her brains, wit, and sound judgment to find her father in the land Scalenfell. Audiences will laugh and cheer as they meet characters like a figure-skating dragon, a Platypus-saving Pirate, a gate with a flair for the dramatic, and a witch (that they may recognize)! This unique educational opportunity unites science and art by giving kids a chance to laugh, dance, and think critically about topics rooted in STEM.

Bystander Training: How to be an Advocate
(created for middle and high schools, but is customizable for all groups and ages)

Our bystander training tools and techniques empower anyone by giving them safe and simple steps to “Stand Up” and “Stand By” potential victims of intolerance, abuse, and violence. We customize each presentation to you and use techniques used in theatre to empower potential bystanders and victims of harassment through education and practical application in a real time, improvised scenarios so groups can put these tools to work in a safe situation. This program created in collaboration with Spotlight Training.

Go to Know!
Education programming that brings YOU to US.

Drink and Play: Adult Summer Camp
(created for ages 21 and up)

Imagine your favorite childhood summer camp. Pretty great right? What could have made it better? A fully stocked bar, perhaps? Come join us July 9th-14th for Drink and Play: Adult Summer Camp. During camp, you’ll experience a great blend of your favorite summer camp activities and the collaborative experience of creating a 10 minute play as a cohort—all with a beer in your hand. Join Camp Counselor Dave F’n Powell and other special guests for Capture the Flag, stage combat, trivia night, improv, water balloons, arts & crafts, and playmaking 101. Each camper receives:

And keep on the lookout for updates on other adult classes offered throughout the year.

Know Theatre is Cincinnati’s Theatrical Playground. The Know showcases unexpected voices, new works, and plays that embrace the inherent theatricality of the live experience. Know Theatre seeks to be a place where artists and audiences feel welcome to take artistic risks, creating work that is cutting edge and accessible.

Know Theatre’s work is made possible, in part, by the generosity of community contributions to the ArtsWave Campaign.

Know Theatre is also supported by The Carol Ann & Ralph V. Haile, Jr./U.S. Bank Foundation, helping to change our communities for the better through collaboration and innovation, and the Greater Cincinnati Foundation, which provides a simple, powerful, and highly personal approach to giving.