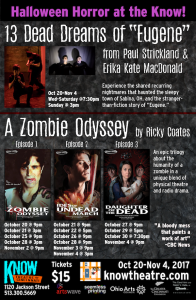 1929, a dead body is found and placed on display in hopes of identification. That’s when the “Dead Dreams” began. Experience the shared recurring nightmares that haunted the sleepy town of Sabina OH, and the stranger-than-fiction story of “Eugene.”

Get your tickets to “Eugene” here!

THE ZOMBIE ODYSSEY IS FOR MATURE AUDIENCES ONLY

A fatality. A wakening. A hunger. So begins newly undead Brian Smith’s epic journey to reunite with his wife. As he battles through an all-too-familiar landscape, getting shot, stripped, strangled, chewed, drugged, and electrocuted, the line between man and monster begins to blur… Writer/performer Ricky Coates (of Cincy Fringe hit Tesla Ex Machina) blends movement, voice, and music to create an unforgettable voyage that pits zombie vs. society to see who is the real monster.

The Zombie uprising meets Julius Caesar. Brian Smith reappears as the Prophet of the Pheonix, spreading the “Word of the Host” along the help of his hearse-driving herald, Eli. Unfortunately, this pilgrimage is proving dangerously infectious… Ides of Undead March takes the story to the next level with all new theatrical inventions, action, and surprises, as Brian and Eli learn that true natures cannot be denied. Enjoy this show from the creator of Cincy Fringe hit Tesla Ex Machina as a standalone story, or as the middle section of the epic Zombie Odyssey Trilogy.

Daughter of the Dead (Episode 3)

In a world where robot drones war with zombie hordes, Penny Smith smuggles herself across a torn land, searching for the man who started it all, her husband. In her arms, she carries the fate of zombies and humans alike. The final act brings audiences to the bottom of the rabbit hole, as Sadie Bowman (Calculus: The Musical, The Famous Haydell Sisters) joins Ricky Coates for the most ambitious play of the trilogy.