by Lauren Hynek and Elizabeth Martin 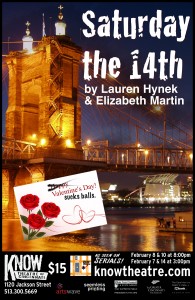 People say it’s Friday the 13th you gotta watch out for. But it’s Saturday the 14th that really sucks balls.

Mitch and Gail are each having the worst Valentine’s Day. Ever. To top it off, they’re both trying to commit suicide by jumping off the very same spot on the very same bridge, and there’s not enough room for the both of them.

With no jumping room and nothing left to lose, they team up to cross a few things off their bucket lists before taking the final plunge.

Along the way they find adventure, understanding, and maybe even love.

The hit romantic comedy from Know’s summer Serials! season is back, reconstituted from six standalone episodes into a continuous one-act play for a limited run of four performances.