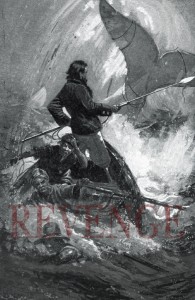 Let’s get one thing clear.

I love this novel.

I love the story. I love the words. I love the massive digressions on the whaling industry. I love the poetry of Herman Melville. I love that as a 30 year old adventure novelist, Melville suddenly decided to take on something more ambitious.

I love the way all of these characters are wrestling with things larger themselves, and that sometimes, paradoxically, that larger thing IS themselves.

I love that Moby Dick has an entire chapter called On The Whiteness of The Whale wherein Ishmael/Melville unpacks the possible metaphorical implications of the novel within the novel itself.

I love that the novel often breaks into stage directions (e.g. “Enter Stubb to Ahab”) and has whole chapters written as though it is a playtext.

I love that Melville was not afraid of using his prodigious vocabulary in service of beauty.

My first exposure to the story of Moby Dick was through Star Trek. I grew up with Star Trek. The Wrath of Khan (ST II) draws parallels in theme to Moby Dick, as well as featuring frequent other homages to the novel. Indeed, Khan’s final line, “From Hell’s Heart I stab at thee…for hate’s sake I spit my last breath at thee,” is pure Melville.

Star Trek: First Contact, the best of the Next Generation ST films, also has direct parallels with Moby Dick.

Alfre Woodard’s character calls out Patrick Stewart’s Jean Luc Picard on his Ahab-like pursuit of the Borg. Picard then (mis-)quotes a bit of the novel to her.

He piled upon the whale’s white hump the sum of all the general rage and hate felt by his whole race from Adam down; and then, as if his chest had been a mortar, he burst his hot heart’s shell upon it.

To which Woodard’s character replies, “what?”

“Actually, I never read it.”

And this is one of the things that I find fascinating about this novel: given the relatively small number of people who have actually read it in its entirety, its themes, characters, and iconic opening line are pervasive in our culture, popular and otherwise.

I like to think this would be gratifying to Melville. Fewer than 3000 copies of the novel sold in his lifetime, and it received almost unanimously bad reviews (Essentially, “All this poetry and metaphor gets in the way of a great adventure story.”).

Part of this rejection is because critics didn’t know what to make of it. It’s essentially a modernist novel that appeared 70 years before its time.

And it didn’t help that when originally released in London, the novel’s epilogue was omitted.

When I read it

The first time I read Moby Dick all the way through, I actually read it on a phone, an old Palm on which I had installed an e-reader app. I downloaded the free, public domain text from Project Gutenberg, and read the novel over the course of a year in the life of an itinerant designer.

I read it sitting in outdoor theaters waiting for the skies to get dark, sitting alone in diners and restaurants on meal breaks, on planes traveling the country, on trains into and out of new york city.

The life of an itinerant designer is often a lonely one, and I find comfort in very long books that I can carry around in my pocket.

I finished reading the novel sitting outside in a lovely greek-style amphitheatre, just before going into technical rehearsals for an outdoor production of The Tempest at Shakespeare Theatre of New Jersey, weeping as I finished the closing lines.

Through my entire reading experience, I was struck by how contemporary the novel felt, both in form and contact (if not necessarily in the thees and thous of the nantucket whaler speak). I was also struck by how…important the story still is.

Fast forward a few years and my partner, Elizabeth, and I were talking about possible stage adaptations we could do together, and we wondered aloud, “Why has no one done a small cast adaptation of Moby Dick with Sea Shanties?” And we sat down to write one.

But before we started I said, “Maybe we should Google this first…” And then I discovered that this adaptation by Julian Rad existed, contacted him through twitter, got a copy of the script, and found that it did so many of the things we had planned to do. Here it was, with so much of the work already done.

And that compulsion meant I had to see it staged at the Know.