adapted for the stage by Joe Stollenwerk 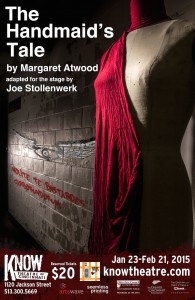 In the near future, what’s left of the United States has become a theocracy known as the Republic of Gilead. As with many women in Gilead, Offred has had her name and family taken from her, forced to become a Handmaid, a vessel for population growth, valued only for her viable ovaries. In the midst of the oppressive new regime, and armed with memories of life before the revolution, Offred struggles to maintain her individuality, personhood, and hope for a better possible future.