Know Theatre is so very excited to tell you some stories in
SEASON 19: Once Upon A Time

Know Theatre is ready to rekindle your sense of wonder in Season 19. Join us and explore the stories we tell ourselves and each other: stories that amuse, that enlighten, and that help us to make sense of the world around us.

These are stories that push at the boundaries of our reality. From mythical Greece; to the 1840s, the 1930s, and the 1990s, to alternative versions of our own time – each of these stories reveals unexpected truths.

“In our 18th Season we produced more work than ever before,” says Producing Artistic Andrew Hungerford. “In season 19, we maintain that rigorous production schedule, and dig deep into stories that make us who we are: as individuals, as families, as friends, as artists, as humanity. We’re continuing to leverage our Playground to create brand new works with local artists. And we’ve assembled an eclectic collection of plays that includes gender parity in our playwrights, our directors, our creative teams, and our performers.”

With six MainStage productions, a special immersive event, year-round SecondStage programs, the 14th Annual Cincinnati Fringe Festival, and more surprises coming your way, Know Theatre has a story for everyone this season.

So pull up a chair. Gather around the campfire. Shine a flashlight at your chin.

Come in and play. 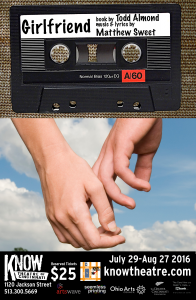 Nebraska, the 1990s. Two teenage boys – one a social outcast, the other the quintessential jock – explore a relationship during a summer of self-discovery between high school graduation and the rest of their lives. Set to the irresistible songs from Matthew Sweet’s landmark pop album of the same name, this rock musical from CCM alum (and local favorite) Todd Almond gives voice to those of us who grew up in small towns, those of us who didn’t quite fit in, and anybody who remembers the terror and thrill of first love. 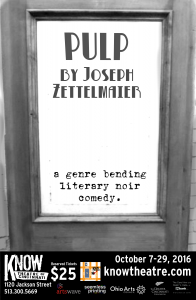 In 1930’s Los Angeles, washed-up PI Frank Ellery takes on the strangest case of his life. A noted literary agent has been gruesomely murdered, and the four suspects are his remaining clients, all writers for different pulp magazines. Frank dives into the mystery, and his world turns upside down as life begins to imitate literature. In this new comedy, science fiction, romance, adventure, and horror combine with one down-on-his-luck gumshoe who’s about to learn what really lurks between the lines. 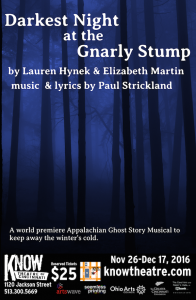 On the darkest night of the year, residents of a secluded Appalachian town gather at local pub, The Gnarly Stump, to share ghost stories and songs. When an outsider arrives reporting the mysterious disappearance of her sister the lines between story and reality become blurred.

This world premiere commissioned by Know Theatre pairs a book from the writers behind Know’s Saturday the 14th, We Will Rise: Stories from the Afghan Women’s Writing Project, and Disney’s upcoming live action Mulan, with music and lyrics from Paul Strickland, local fringe favorite and author of The Trailer Park Trilogy, My Messed Upera, and co-author of Andy’s House of [blank]. 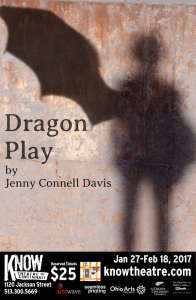 In rural Texas, a teenage boy and a dragon fall in love. A thousand miles north, a woman’s fragile marriage is tested when her fire-breathing ex-lover arrives on her doorstep. A darkly romantic drama, this regional premiere explores longing, loss, and the choices we make, in a world where time is fluid and people can be dragons.

10 words or less: Dragons are people and love is beautifully complicated.
Rated: R

Heavier Than… by Steve Yockey 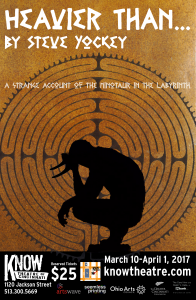 This darkly comic mash-up of Greek myth unfolds in the heart of a labyrinth where Aster the Minotaur contemplates turning 30 in a world that sees him as nothing more than a murderous oddity. Aster has to navigate the impending arrival of warriors out to kill him, a deceptively enticing chorus of Fates, a plotting sister, and Icarus, a sexually obsessed boy with wings, all while pining to see his estranged Mother.

Steve Yockey, author of 2014’s Pluto and 2016’s The Fisherman’s Wife, uses a wry wit, lyric text, and legend to tell a painfully funny and moving story about the families we yearn for versus the families we have. Know is proud to present the second professional production of this evocative play, first produced by the Theatre @ Boston Court. 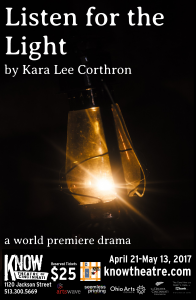 Listen for the Light by Kara Lee Corthron
directed by Tamara Winters
World Premiere
April 21 – May 13, 2017

A former slave with a tragic past questions his faith, a powerful man fights his inner and outer demons, and a precocious young woman locked in a room reluctantly awaits word from God. It’s 1844 and in the small town of Nauvoo, Illinois, Joseph Smith—Mormon prophet—rules all. Or so he believes. Know Theatre is thrilled to produce the World Premiere of this play by award-winning playwright Kara Lee Corthron, originally commissioned by South Coast Rep. 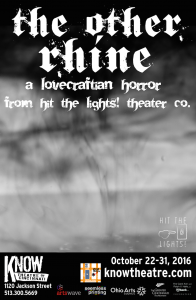 The Other Rhine: A Lovecraftian Horror
created by Hit the Lights! Theater Co.
World Premiere
October 22-31, 2016

A hidden terror lurks beneath the streets of Cincinnati. In The Other Rhine, we invite audiences on a site-specific tour of a mysterious location where you’ll uncover what is hiding where reality wears thin.

Developed by Hit the Lights! Theatre Co., the artists behind 2015 Audience Pick of the Fringe dungeon, The Other Rhine draws inspiration from immersive theatre works like Punchdrunk’s Sleep No More and the classic horror fiction of H. P. Lovecraft. The Other Rhine melds storytelling, a haunted house, and HtL‘s signature use of light and shadow to create a theatrical experience like no other in this World Premiere collaboration.

1MPF invites local writers and community members into their unique playmaking process. Writers are asked to consider the world around them, their cities, their communities and the ways in which they view the world, before writing topical moments that say something about the world as it is in the here and now. Local directors, actors, and community members are tapped to stage and shape these moments (70-90 on average) with a unique local flavor.
July 10-12, 2016

Are you on the list? Our annual holiday show featuring OTRimprov returns to Arnold’s Bar and Grill, with some new surprises hidden in its novelty Santa hats.
December 2016

Serials continues in Winter of 2017 with a reprise of our theatrical deathmatch, now with an even more ridiculous title!

Did you love a show at Serials last season? Watch it again, without the agonizing wait between episodes. Select Serials shows will hit the stage once more as continuous stories you can enjoy in one sitting, just like you Netflixed ‘em. Binge Watch shows to be announced soon!

How many shows will we pack in for Fringe 2017? Only time will tell! But you can bet on 12 days of madness and delight in the region’s largest performing arts festival that’s Kinda Weird. Like You.

Whenever we can, you can count on us bringing back old friends and Fringe favorites all year long.

…and (if you can believe it) there will be a few more surprises!

$25 in advance for all Mainstage Shows

$TBA for The Other Rhine

Six show flex passes that never expire are available for $110.

Know Theatre remains committed to providing access to live theatre for anyone who wants to see a show, including FREE performances on select Wednesdays, as part of Know’s Welcome Experiment initiative.

New Welcome Experiment Guidelines for 2016-2017: Advance reserved tickets will be available for $5.00. 50% of the Wednesday night house will always be reserved for free walkups. All seating is subject to availability.

One-year sustaining Memberships are available for $25/month or $250/year.

Membership benefits include: 1 reserved ticket to every MainStage and SecondStage show, discounts on additional tickets and special events, the ability to reserve specific seats in advance, discounts at the bar, & more.

Since 1997, Know Theatre has been dedicated to creating explosive and evocative live entertainment. We value a playful artistic community where artists can collaborate and grow.

Know Theatre’s work is made possible, in part, by  the generosity of community contributions to the ArtsWave Campaign. The Ohio Arts Council helps fund Know Theatre with state tax dollars to encourage economic growth, educational excellence, and cultural enrichment for all Ohioans. Know Theatre is also supported by The Carol Ann & Ralph V. Haile, Jr./U.S. Bank Foundation, helping to change our communities for the better through collaboration and innovation, and the Greater Cincinnati Foundation, which provides a simple, powerful, and highly personal approach to giving.